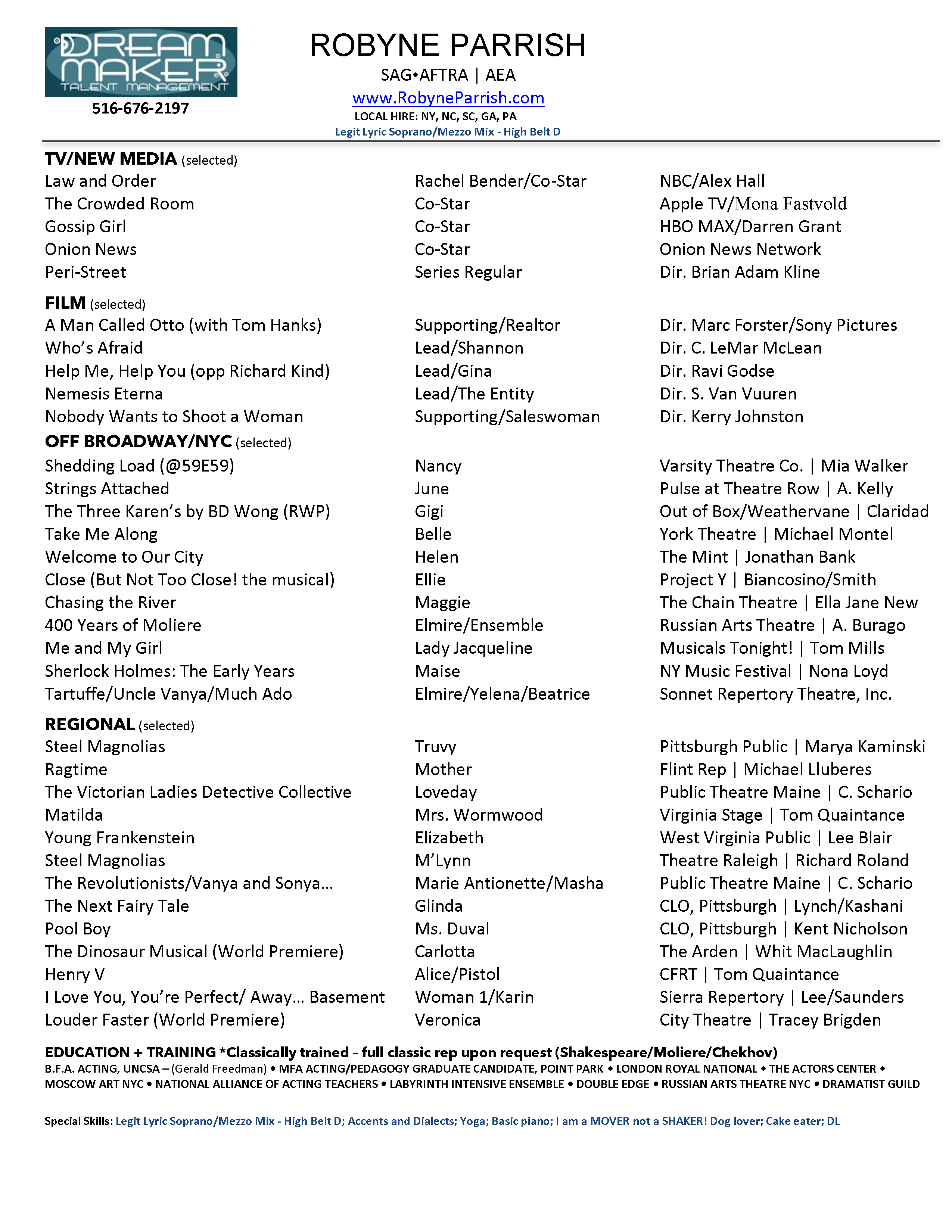 Ms. Parrish was accepted into and participated in several prestigious arts programs throughout her early education including the Tri-District Arts Consortium in SC and the SC Govenors School of the Arts. She was also awarded Superior in Acting from the South Eastern Theatre Conference.


She began her professional actor's training at the University of North Carolina School of the Arts (UNCSA) where she received her Bachelor of Fine Arts Degree in Drama. UNCSA is ranked one of the top acting conservatories in the world. Ms. Parrish received extensive classical training including voice and speech work with an emphasis on alignment, mask and movement, both the Meisner and Stanislovski Techniques, and Shakespeare. She has been trained by some of the worlds greatest teachers, including renowned director, Gerald Freedman, Cigdem Onat, Bob Fransisconi, Mary Irwin and Broadway dance legend, Molly Murray. While at school, Ms. Parrish played The Bakers Wife in "Into the Woods", Beatrice in "The Effect of Gamma Rays on Man in the Moon Marigolds" and Natasha in "Rough Crossing". After graduating, she returned to NC as a guest artist to play the role of Angharad in the musical version of the novel "How Green Was My Valley" entitled "A Time for Singing", written by Gerald Freedman and John Morris.


After University, Ms. Parrish moved to NYC and spent many years working Off -Broadway, Regionally and in National Tours. Ms. Parrish had the great fortune of studying with Patsy Rodenburg and Ian McKellen at the Royal National Theatre in London. In 2004, Parrish founded Sonnet Repertory Theatre, in NYC.


Later, Parrish was a Graduate Fellow Candidate for three years at Point Park University in the MFA in Theatre Performance and Pedagogy Program. In addition, Ms. Parrish completed an MA degree in Psychology. In 2012, Parrish took the position of Artistic Director of the Gilbert Theatre in Fayetteville NC where she remained for five seasons.


Now a full time Actor/Director/Producer/Coach based in NYC, Parrish continues her personal study at Russian Arts Theatre NYC, Double Edge Theatre in MA and Stanislavsky Active Analysis with Cotter Smith. As an educator, Parrish teaches online theatre arts classes at the collegiate level and is Head Coach at Parrish and Co., NYC, where she specializes in Private Coaching, Scene Study and Monologue Matchmaking for the actor. **Member of the National Alliance of Acting Teachers, AEA and SAG-AFTRA.


Most recently: A Man Called Otto with Tom Hanks; GOSSIP GIRL HBO Max; Hail Mary with Tine Benko, Max Casella and Lev Gorn; Feature Sci Fi Nemesis Eterna, the short Horror film Who's Afraid, the new play When We Fall with the Pittsburgh Public Theatre, the new musical Close, But Not Too Close with PROJECTY NYC, available to stream now, appeared in the rolling world premiere of BD Wong’s The 3 Karen’s with Weathervane Theatre and OOTB NYC and as Elmire in Tartuffe with the Pittsburgh Public Theatres Playtime. In 2019/2020: The Giant Hoax Off Broadway with Indieworks at Theatre Row and Off Broadway at the Chain the the WP of Chasing the River.

Off Broadway: York Theatre, The Mint, Musicals Tonight!, Sonnet Rep and the NY Music Festival. Regional: The Arden, Virginia Stage, the Pittsburgh CLO, Theatre Raleigh, PMT, NJ Rep, Sierra Rep and the Public Theatre of Maine. An Addy award winning commercial actress; best actress in the short film Vulnerability (which she co-wrote and produced) at PCIFF and starred opposite Richard Kind and Steve Guttenburg in the feature, Help Me, Help You. Nominated Best Supporting Actress at the NYFTV Festival for the new series Into Gray. Currently producing/acting/writing/directing in multiple indie/short films/webseries in the NYC indie community (including the award winning Peri-Street).