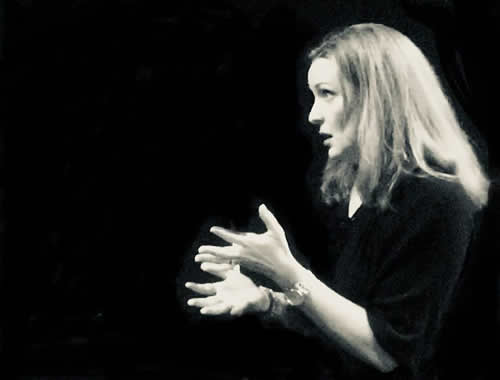 ***Still Birth. written by Parrish and Campany and Directed by Parrish was nominated for Best Play in the New York Theatre Festival Summerfest 2017.

***It's a Wonderful Life at The Gilbert Theatre NC, Directed by Parrish, won Best Show and Best Director in the 2016 Pryer Awards.

What They Are Saying...

A Man of No Importance - Front Port Theatricals 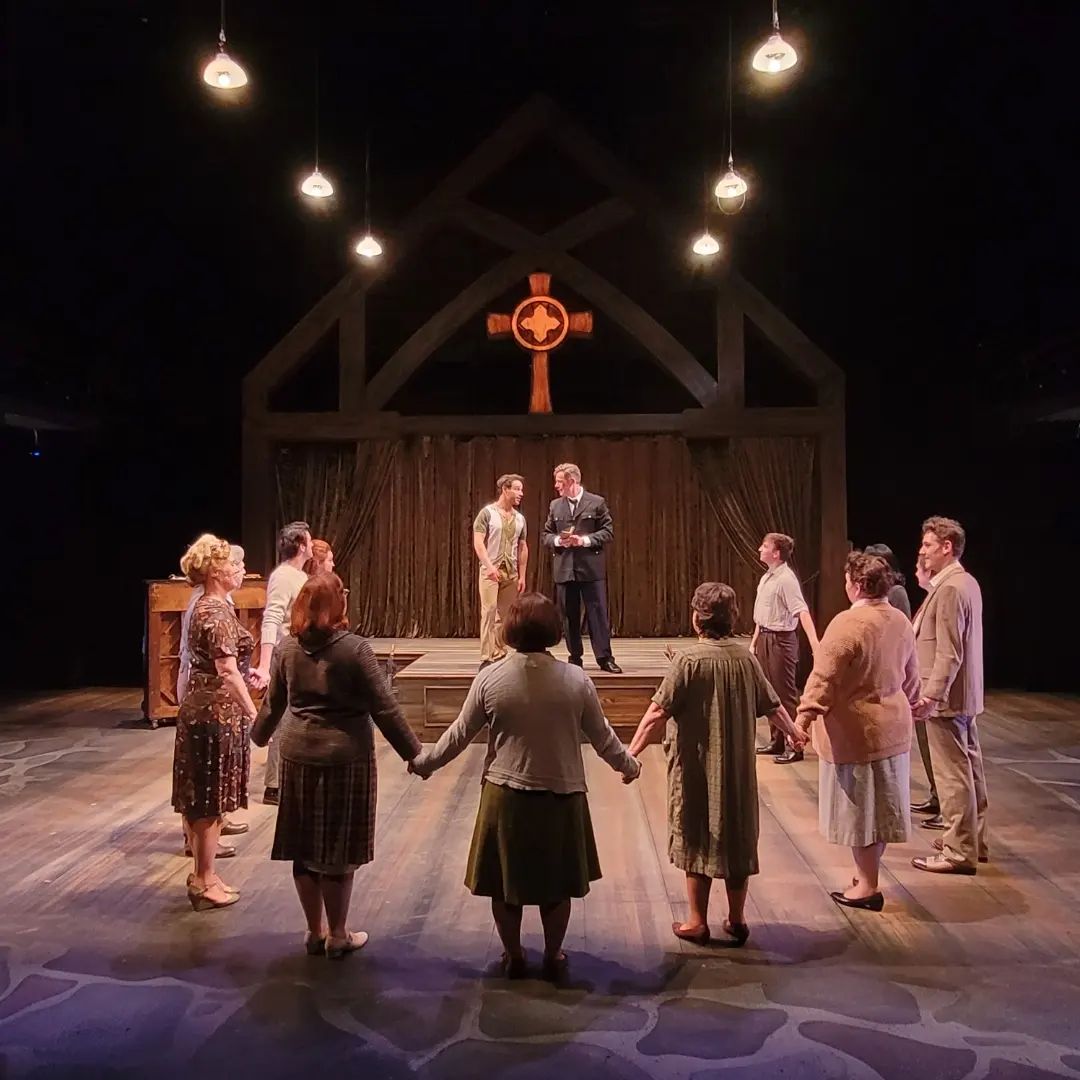 "Robyne Parrish directs this production of A Man of No Importance. She is a force of nature who can act, direct, produce, write, teach and mentor. Her talents are certainly not wasted here, and her vision of this production is one to be proud of. The casting is superb." - read more at: https://onstagepittsburgh.com/2022/05/21/review-front-porch-theatricals-a-man-of-no-importance/ 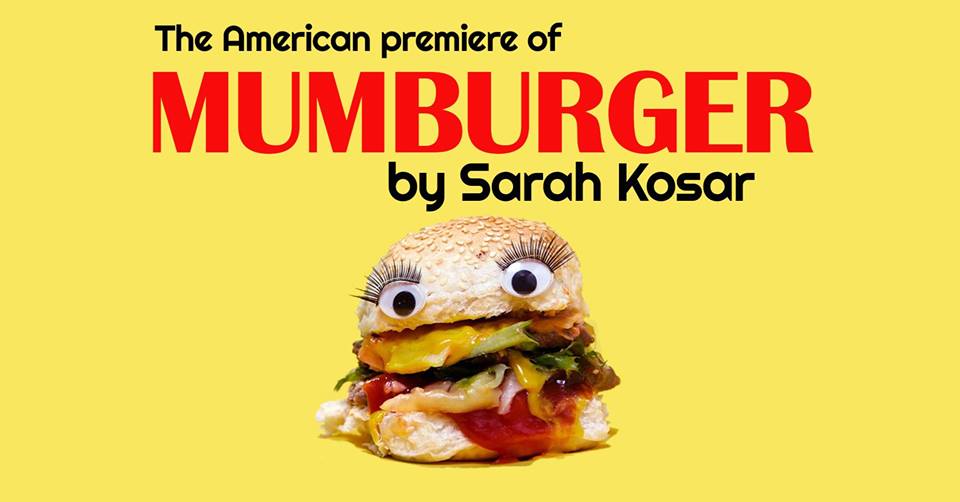 Mumburger - Off the Wall Productions

"Ms. Goodman and Mr. Bolden are so fully engaged, it’s almost unbearable to watch their dance but harder to look away. They speak and move at a frantic pace, physicalizing the idea of minds racing to understand or avoid the incomprehensible. They walk in circles, sometimes close enough to embrace but stuck in an arm’s-length dance." - Pittsburgh Post Gazette

"Off the Wall's production of "Mumburger", directed by Robyne Parrish, checks all of those boxes."
- Ted Hoover - Pittsburgh Current

"More honest than the account of grief is Tiffany and Hugh's relationship. Director Robyn Parrish has designed a delightfully satisfying dance between Tiffany and Hugh, and Goodman and Bolden have mastered its' choreography. Watching Goodman and Bolden interact really is like watching a dance. They move across the stage, circling one another, in melodramatic movements and explosive emotion. Parrish’s direction solidifies the audience engagement." -  Pittsburgh In The Round

"Sarah Kosar's Mumburger is directed for off the WALL productions by Robyne Parrish. When actors excel, you’d better believe the director deserves credit. Parrish has brought them to a fine pitch." - Entertainment Central Pittsburgh 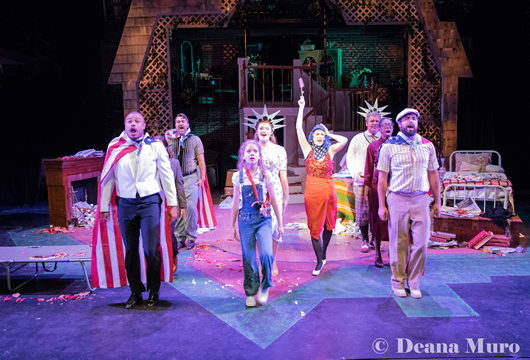 "Robyne Parrish directs with an enormous compassion for these women without downplaying the hurt they cause. She refuses to take sides, allowing both women the space to tell their truth. " - Grey Gardens at Front Porch Theatricals
- Ted Hoover - Pittsburgh Current

" Once again, Front Porch earns its marks with this production of Grey Gardens. Director Robyne Parrish and the producers have brought together an incredibly talented group of actors and designers. Parrish brings out the best of them, showcasing both the material and their interpretive talents. " -  George Hoover, PIttsburgh in the Round - Grey Gardens FPT

"The play may be the thing, but in the case of The Carols, it’s really about the skill of the director and the singing, dancing and acting talents of the ensemble cast that make it a fun-filled laugh-out-loud show to watch and enjoy. Director Robyne Parish recently directed the well-received production of Violet for Front Porch Theatricals this past summer. ...she has drawn upon some of our regions most talented actors. ...characters as written are as thick as greasepaint. Parish has humanized them, reminding us that we all know and love someone who is just like them. The brilliance of Parish’s casting shines in the vocal talents of the actors. Any shortcomings in the plot are more than made up by this talented ensemble of actors under Parish’s and Stamatakis’ direction." - Pittsburgh in the Round

"Director Robyne Parrish works against the first act’s pacing problems by milking every ounce of charm out of the Carol sisters. She’s worked hard to create light holiday fare that everyone can enjoy. " Pittsburgh City Paper 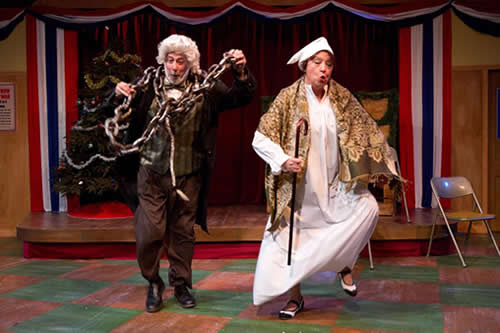 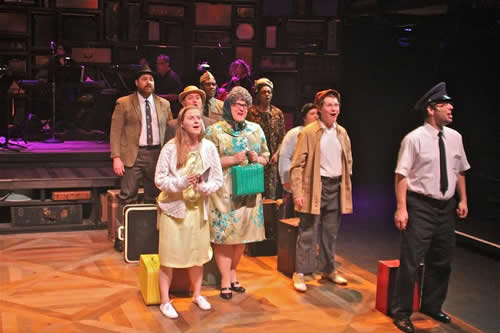 "I don't know if they're practicing witchcraft over there, but Front Porch has managed to summon the perfect person for every role - from director Robyne Parrish and her forceful, deeply human vision to musical director " - Pittsburgh City Paper - http://www.pghcitypaper.com/pittsburgh/violet-at-front-porch-theatricals/Content?oid=2946404

"Director Robyne Parrish has staged the action with flair, taking good advantage of the flexibility of the scene and lighting design to make smooth, flowing transitions from moment to moment, and in many places she manages to achieve the impression that the cast is twice its size." - https://wendyarons.wordpress.com/2017/05/28/violet-at-front-porch-theatricals/

4.48 Psychosis by Sarah Kane at Off the Wall Theatre 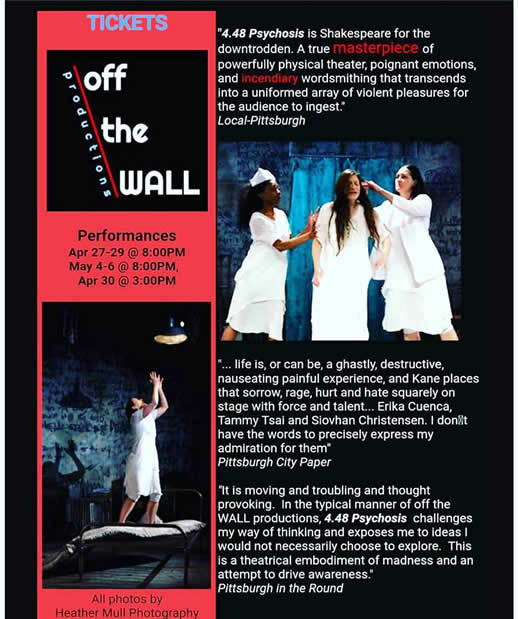 PGH In The Round

"But the true superstars of the night must go to the Director Ms. Robyne Parrish and the choreographer Mr. Gavan Pamer, both of whom are also featured as actors in the cast. Under Ms. Parrish's direction, all five acts came together as one seamless unison of satirical comedy..." 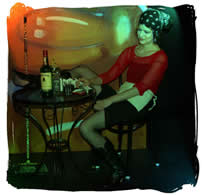 The Zero Hour by Madeleine George 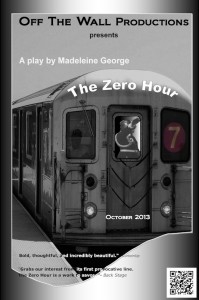 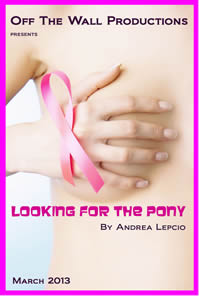 Looking for the Pony by Andrea Lepico 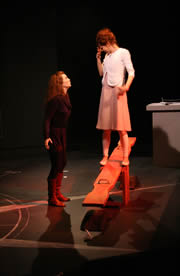 "Stop Kiss - Director Robyne Parrish uses a Brechtian technique to define time jumps. In the present, the actors face the audience instead of facing each other. It’s a little disconcerting but pays off with emotional resonance later in the play."

"New York reviewers spoke of it as both  comic and serious. But as ably and  insightfully directed by Robyne Parrish,  this production seems fundamentally  serious. ... evoking substantial reality from  the cast." - Gordon Spencer - WRTC

"Mercy Seat... Clearly director Parrish has found ways to  get the most out of these talents. She has  also made thorough and natural use of a  true-to-life set thereby evoking a sense of  reality rather than fiction. She also tellingly brings out some of the character's  inner workings in how and where they  move as well as what they do with the  everyday trappings of life." - Gordon  Spencer, WRCT

"Director Robyne Parrish has done an  outstanding job creating the highs and  lows of The Mercy Seat. Sometimes it's  brutal, sometimes it's funny and it's  always disturbing. Parrish has paced the  play beautifully and had wrung two  powerful performances from her cast." -  F.J. Hartland - Out on line Theatre Review 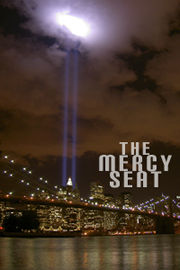 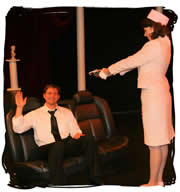 House of Yes by Wendy MacLeod

"Director Robyne Parrish opens the play with a stylized and highly choreographed dance that sets the tone for the madness that’s to follow in the next ninety minutes."

Pan: The True Story of Peter Pan by Jeremy Fiebig

“Another aspect of the show is the dialects. The Barrie family were born and raised in Scottland, and so Scottish accents were needed for almost every actor in the show, including the youngest. Robyne Parrish, the dialect coach and artistic director of the Gilbert Theater, should be applauded for her work.

"Director Robyne Parrish has worked hard at the comic timing and moves the play at a pleasantly rapid pace."

Robyne Parrish is an Actor/Director, currently residing in NYC. Most recent: Directed her original play Still, Birth: a play about pregnancy loss with Co-Writer Coley Campany at the Chain Theatre in NY, thanks to a grant through NYFA at the City Artist Core.

Regional directing credits include: Urinetown and The Carols at the Gilbert Theatre NC, The Seagull at Seton Hill University, Mumburger at Off the Wall (also at Off the Wall 4.48 Psychosis, The Carols, The Musical of Musicals the Musical, Stop Kiss, The Zero Hour, The Mercy Seat, House of Yes, Looking for the Pony, and Shaken and Stirred) Steel Magnolias with the Great American Melodrama and Grey Gardens with Front Porch Theatricals. In 2018, Parrish directed her new play, Still, Birth. co-written with NYC Labyrinth Theatre Ensemble collaborator, Coley Campany, for the New York Theatre Festival where it was nominated for Best Play. She served five seasons as Artistic Director of the Gilbert Theatre in NC. In NYC she was Founding Artistic Director/Executive Director for six years of Sonnet Repertory Theatre Inc. and assistant/intern to the Company Manager of WICKED on Broadway. Memorable directing credits include: Violet..., Gamma Rays..., The Diary of Anne Frank, The Fantasticks, Much Ado About Nothing, A Christmas Carol, It's a Wonderful Life, Fences and Quilters. Appeared Off-Broadway as an actor (The York, The Mint, Musicals Tonight!) and has directed for various festivals, off- (and off-off) Broadway: Chain Theatre One Act Festival, Musicals Tonight!, Insomniacs, NYICF, NY Artists Unlimited, Sonnet Rep, and the 79th Street Workshop/Incite Productions). A theatre educator for more than 20 years teaching students from grade school through the collegiate level, she is currently Adjunct Theatre Professor at FTCC in Acting/Voice and a private coach/Acting Teacher through her company, Parrish and Co. BFA in Drama from the University of North Carolina School of the Arts and MFA Graduate candidate in Theatre and Pedagogy at Point Park University. Labyrinth NYC Intensive Ensemble member, trains with Double Edge Theatre, Cotter Smith and the Russian Arts Theatre and Studio. Proud member Actors Equity/SAG-AFTRA, performs regionally across the country and published author RM Parrish. Member Dramatist Guild. More at www.robyneparrish.com.

Looking for the Pony


Looking For The Pony - Interview from Off The Wall - Pittsburgh on Vimeo.


Off the Wall Promo from Off The Wall - Pittsburgh on Vimeo.